Your Wedding Rings are Safe, Thanks to Your Local Bankruptcy Lawyer

I strongly believe that a person should not fear losing his or her wedding ring due a debt. Wedding rings are a symbol of a couple’s union and should be preserved at all costs. As a bankruptcy lawyer and a citizen of Minnesota, I did not think that the existing laws (prior to 2005) were fair because they permitted creditors to take a person’s wedding ring to satisfy a debt; so, I decided to do something about it.

Lack of Protection for the Symbol of Marriage 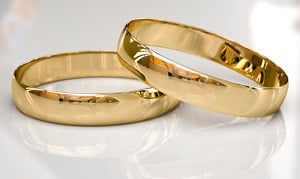 Prior to the change in Minnesota exemption laws, a creditor could obtain a judgment against you that would allow them to seize your wedding ring to satisfy the debt you owed. Under Minnesota Statute 550.37, certain assets of a debtor are considered exempt. In other words, creditors cannot seize these assets from a debtor to pay the debtor’s debts. Under the old exemptions laws, a debtor’s wedding ring was not exempt. Creditors were able to seize your wedding rings, sell them and use the proceeds to pay the debt that you owed. Can you imagine owing a dentist bill for $300 and having your wedding ring seized and sold to pay for the debt?

Under the federal bankruptcy exemptions, wedding rings and jewelry are protected up to a certain dollar amount (i.e. it is capped at a maximum dollar figure). My argument was that the state of Minnesota should also protect the symbol of marriage between two people. I wanted our senator at the time, Betsy Wergin, and Representative Mark Olson to draft a bill similar to the federal exemption counterpart under Section 552(d)(4) which states, “The debtor’s aggregate interest, not to exceed $1,550 in value, in jewelry held primarily for the personal, family or household use of the debtor or a dependent of the debtor.”

Senator Betsy Wergin’s proposed bill stated, “The debtor’s aggregate interest in wedding rings, not to exceed $1,225.00 in value, held primarily for the personal or family use of the debtor or a dependent of the debtor.” This is the current law as it was passed by our legislature in 2005.

The problem with the wording of the law that passed is that it did not protect engagement rings, only wedding rings. I would have preferred the generic language of the federal statute; however, our esteemed representatives did not choose to adopt this language. I am not sure what their fear was, but so be it. If they had adopted the federal language, as I suggested, debtors would have been able to protect any jewelry they wanted to up to the maximum amount of $1,225.00, so engagement rings could also have been protected. Nevertheless, my argument for changing the law was because it failed to protect the one symbol of marriage we have between two people and that, culturally speaking, was intolerable.

The change in this Minnesota law means that no debtor in the state of Minnesota has to give up their wedding ring to a creditor to satisfy debts, provided the value of the wedding ring is below the maximum exemption amount. This change protects one more precious asset from creditors.

The process of changing the exemption law to include wedding rings took about two years. I sent a joint letter to Senator Betsy Wergin and Representative Mark Olson on October 23, 2003, explaining the lack of protection for wedding rings under Minnesota law. I did not hear back from my first letter; therefore, I sent another joint letter to them on April 14, 2004. I again heard nothing. I then sent a third joint letter to them on September 17, 2004 and finally heard back from Senator Wergin and Representative Mark Olson.

They agreed to draft a proposed bill for me to consider, which they did. I suggested they modify the language to mirror the federal law; however, they chose not to take my suggestion. In 2005, Minnesota Statute 550.37(4)(c) was amended to read: “The debtor’s aggregate interest in wedding rings, not to exceed $1,225.00 in value, held primarily for the personal or family use of the debtor or the dependent of the debtor.”

Your life and the things in it are important, and as your local Bankruptcy lawyer, I want to make sure they are protected. For more news and other bankruptcy information, sign up for our newsletter.