How should you feel about filing bankruptcy? 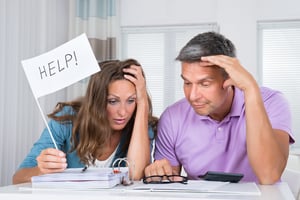 People occasionally tell me they feel bad about not paying their debts when considering bankruptcy. Sometimes, people are even downright distraught and try to apologize for being irresponsible. First things first: you do not have to apologize for taking a problem seriously and considering your options. But it also got me asking myself: is it morally wrong to not pay your debts?

Well, it is admirable and certainly not a bad quality. Surely people usually do not want to stiff their family, friends, or close members of their community. This leads some people to say it’s just common sense and the responsible thing to do – and this is where I begin to occasionally disagree. Should you feed your family rather than paying your phone bill? Almost certainly. Would you pay for lifesaving medical treatment now rather than past medical debt? I would hope so for your family and friends.

Debt forgiveness, an umbrella term which includes bankruptcy among other measures, is not new. In the Book of Leviticus, God counseled Moses to forgive certain debts every Jubilee year. In ancient Athens, the lawmaker Solon freed debtors from serfdom and debtor’s prisons, what today would fairly be called slavery. The first bankruptcy law was an English law dating back to 1542, and previously, states, including Spain and France, had declared bankruptcies despite no precedent.

These instances of debt relief all occurred in vastly different economic conditions than exist right now: Solon freed the slaves just as Greece was transitioning from a rural subsistence economy to an increasingly commercial economy complete with coinage; whereas the state bankruptcies of Spain occurred during the age of mercantilism and its dark shadow, inflation. Don’t ask me how to economy worked during the Old Testament era though, I’ll need a biblical scholar for that one.

The point is: debt relief is neither new, nor a scam. It’s a tool for people and society to get back on their feet. If you are interested in the history and philosophy of the economy, bankruptcy, and debt, stay tuned for my blog posts. And, if you are thinking about filing, reach out to us at www.lifebacklaw.com.