Does A Minnesota Bankruptcy Stop Eviction? 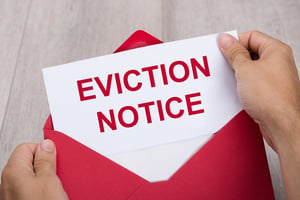 The quick answer is yes, but you have to act quickly.

Before 2005, an eviction was just like a foreclosure. Even if a landlord got a signed court order from a judge, a bankruptcy stopped the eviction process. The Automatic Stay in Section 362 of the Bankruptcy Code applied. But the oddly-named Bankruptcy Abuse Prevention and Consumer Protection Act contained a number of pro-creditor changes, and the interplay between the stay and eviction was one of them.

Exact procedure varies by jurisdiction, but the legal eviction process is about the same state-to-state.  If the tenant violates the lease, the landlord can file suit in state court. Usually, the judge quickly hears all the evidence and makes a decision right on the spot. The landlord’s complaint nearly always involves unpaid rent. But there may be other problems as well, such as keeping a pet or exceeding the occupancy.

If the judge issues a decision in favor of the landlord, the landlord usually has the judge sign a writ of execution. This writ orders a peace officer, usually the sheriff or constable, to physically evict the tenant.

If the tenant files a Minnesota bankruptcy before the judge signs that writ, the Automatic Stay applies. If the filing comes after the judge signs the writ, the Automatic Stay does not apply. This change was designed to keep tenants from “playing” the system by waiting until the last minute to file a Minnesota bankruptcy. But like many of BAPCPA’s provision, this one may do more harm than good.

The Automatic Stay in a Minnesota Bankruptcy

If the tenant files before the deadline, Section 362 applies in full. This provision does not just apply to adverse action like eviction, foreclosure, wage garnishment, and repossession. It prohibits any communication between debtor and creditor for as long as the case remains pending.

Typically, the Automatic Stay remains in effect as long as the Minnesota bankruptcy is active. So, you will probably not hear from your landlord for the duration of the case. However, your monthly rent is still due. Continue to pay it as agreed, or else you will have a very big bill and no bankruptcy protection when the case ends.

Many times, there is more involved with an eviction than just a dispute over unpaid rent. As mentioned earlier, landlord and tenant may disagree over something like property use. Or, the tenant may withhold rent because the landlord is not properly maintaining the property. In cases like these, there are almost always two sides to the story.

Disputes of this nature were tailor-made for mediation. Without mediation, a bankruptcy judge must sort through the evidence and determine who owes what. But meditation gives the parties a chance to work out these issues on their own.

There is help available during this process. A neutral third party, who is usually a nonaligned lawyer or a retired judge, works with each party. The mediator looks for common ground and tries to facilitate a settlement agreement. For example, if the landlord says the tenant owes $1,000, the landlord might agree to take $500 and drop the dispute.

Significantly, the landlord has a duty to negotiate in good faith during mediation. In plain English, the landlord must be anxious to resolve the matter and be willing to make some sacrifices. If the landlord, or any other party, does not live up to this responsibility, the judge becomes involved. And no one likes to go to the principal’s office, especially if the principal has the power to put you in jail for contempt.

Despite the restrictions introduced in 2005, a Minnesota bankruptcy can still stop an eviction. For a free consultation with an experienced bankruptcy attorney in Minnesota, contact Kain & Scott. We have nine offices throughout the state.